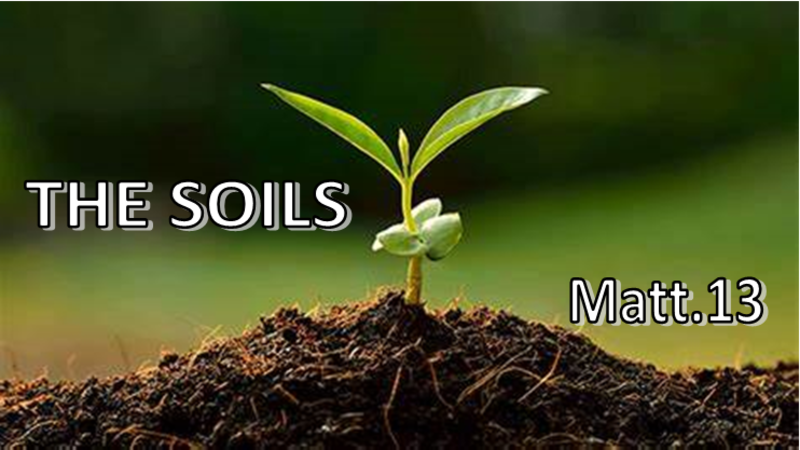 1. The situation. Verses 1-2 “That same day Jesus went out of the house and sat by the lake. Such large crowds gathered around him that he got into a boat and sat in it, while all the people stood on the shore.” A. “While a large crowd was gathering and people were coming to Jesus from town after town, he told this parable” Luke 8. Jesus understands the crowds hearts. Matthew 13:10

2. The sower sows seed Verse 3 “Then he told them many things in parables, saying: “A farmer went out to sow his seed.” A. Who is the farmer - sower? Why is this not important? Not the main point of the parable. The sower is the one who proclaims the gospel. Jesus, the apostles, us…

4. The soils described. Verses 4-8 “As he was scattering the seed, some fell along the path, and the birds came and ate it up. Some fell on rocky places, where it did not have much soil. It sprang up quickly, because the soil was shallow. But when the sun came up, the plants were scorched, and they withered because they had no root. Other seed fell among thorns, which grew up and choked the plants. Still other seed fell on good soil, where it produced a crop—a hundred, sixty or thirty times what was sown.” A. When Jesus mentions four types of soils, He is not giving percentages. The soil could be described as four different hearts or people.

5. The significance of the soils. Verses 18-23  “Listen then to what the parable of the sower means…: A. No response. The hard heart makes it easy for the enemy. When anyone hears news of the kingdom and doesn’t take it in, it just remains on the surface, and so the Evil One comes along and plucks it right out of that person’s heart. B. Emotional response. The flesh is easily swayed by emotional appeal, music, circumstances. The seed cast in rocks—is not soil with rocks scattered in it, but rather a thin layer of soil over hard this is the person who hears and instantly responds with enthusiasm. C. Worldly response. Preoccupied with their worldly life. This is the person who wants the best of both worlds. They profess to believe in Jesus, but their heart is divided. The seed cast in the weeds is the person who hears the gospel but weeds of worry and missing out on the promises of the world means nothing comes of their profession, no fruitfulness. D. Humble response. The seed cast on good earth is the person who hears and takes in the gospel, and then produces a spiritual harvest beyond his wildest dreams.

6. The spiritual truths of the parable. Verse 13 “Whoever has ears, let them hear.” A. Our focus often is on the sower and the sowers effectiveness. Jesus’ emphasis was on the soil, rather than on the sower, or the seed B. It is not just what we hear! The pastors responsibility, (Gospel message, good doctrine, inspirational, application); but how we hear! Your responsibility, (to hear, receive and apply) The seed of truth (God’s Word) will grow only in receptive soil! C. This parable helps us to examine our hearts to see how we respond to the Word