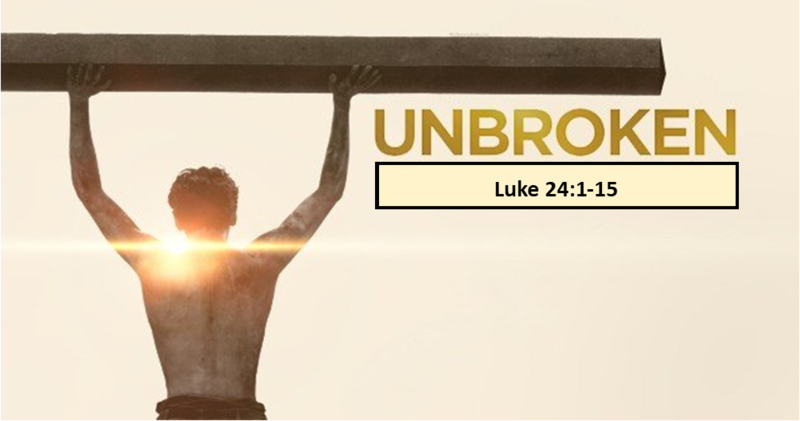 1. We all face obstacles, the question is will we seek Jesus? “On the first day of the week, very early in the morning, the women took the spices they had prepared and went to the tomb.” Luke 24:1

A. Emotional - Imagine the despair these women witnessed—the brutality of the crucifixion.

B. Physical – They were loaded down with spices and the tomb had a heavy stone blocking the entrance.

C. Spiritual - Fear of being found as Christ followers.

2. Obstacles come in many forms. “But they did not believe the women, because their words seemed to them like nonsense.” 24:11

A. It didn’t take long for these women to face obstacles and opposition. These women shared great news and they were not believed.

3. The obstacle of doubt is one of the greatest barriers we face. “Peter, however, got up and ran to the tomb. Bending over, he saw the strips of linen lying by themselves, and he went away, wondering to himself what had happened.” Luke 24:12

A. Peter had denied Jesus three times and now he doubts what he is seeing. Our past can cause an obstacle.

4. Christ is our UNBROKEN and RISEN Lord. “Why do you look for the living among the dead? He is not here; he has risen! Remember how he told you, while he was still with you in Galilee.” Luke 5&6

A. Beaten, bloodied, crucified, had a spear drove into his side, dead and buried. The angel had the greatest news in human history. He has risen!

5. Where will you go from here? “Now that same day two of them were going to a village called Emmaus, about seven miles from Jerusalem. They were talking with each other about everything that had happened. As they talked and discussed these things with each other, Jesus himself came up and walked along with them” Luke 24:13-15

A. In a short time you will be headed home. Will you be moving towards the unbroken Lord or away from Him?